Meeting Time & Location
Meetings are held the second Friday of every month at Bon Air United Methodist Church, 1645 Buford Road, Richmond, VA. Meetings are free.
To become a member of the club, use the application form

Richmond Amateur Radio Club was founded in 1916, and is the oldest ARRL affiliated club in Virginia. Throughout our history, we have assisted the community by providing communication for many events and during natural disasters. The RARC also sponsors a radio school with license classes and testing exams offered twice a year. The Club also sponsors the only digital DStar repeaters in the central Virginia area. 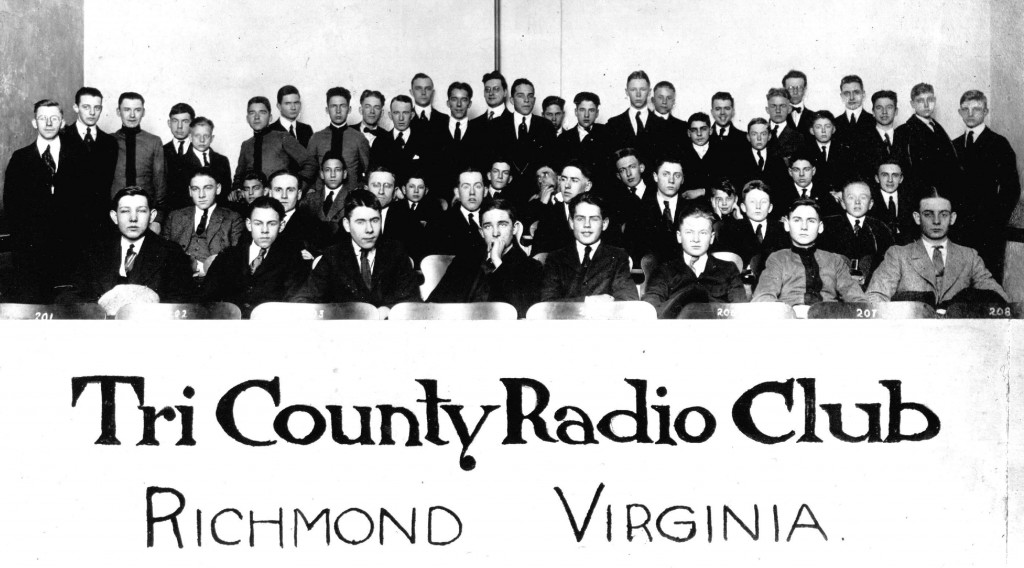 DISCOVERIES ABOUT THE HISTORY OF THE RICHMOND ARC: 1916-1948

When the Titanic struck an iceberg on April 15, 1912, the confusion and failures of communications by wireless radio contributed to the loss of many lives.  Late in 1912, the U.S. Congress enacted legislation to bring order out of chaos on the airwaves.  All radio stations were required to register with the U.S. Department of Commerce.  A list was published of all stations that had registered as of July 1, 1913.  There were five amateurs in Virginia who had registered, and three of them were in Richmond.

Department of Commerce, Bureau of Navigation, Radio Stations of the United States

“Their number grew until one April day in 1916 a formal meeting was held and a name was adopted. The Tri-County Radio Club was born.”  [Richmond News Leader, April 16, 1948]

From April, 1917, through September/October, 1919, no amateur radio transmissions were allowed, and antennas had to be taken down.  Many amateurs served in the military, since they knew the Morse code and they were already trained for communications. The same was true in World War II.  Getting home from military service, finding work, marrying and finding a place to live would have taken time.  It is not surprising that once they settled down, they wanted to pick up their lives again, including amateur radio.

“VIRGINIA — The Richmond Short Wave Club is progressing nicely.  There are now 20 members in good standing.  A committee takes care of banquet arrangements each month.  Director Gravely has approved the organization officially so that it may become affiliated with the A.R.R.L.  With the cooperation of the old timers and with the new policy of the Club we expect to see lots of doings at Richmond.”

In October 2001, The ARRL VA Section Affiliated Club Coordinator, W4IM, presented a certificate to the Richmond ARC for seventy five years as an affiliated club, beginning September 20, 1926, and this certificate is in the Club’s archives.

The name of the Club was the Richmond Short Wave Club from sometime between 1921 and 1926, until it was changed again in 1938 to its present name as the Richmond ARC.  This change was reported in the “ARRL Affiliated Club Bulletin,” January, 1970:

“The Richmond ARC is a fine example of a loyal, durable affiliate. The club was first affiliated under the name of The Richmond Short Wave Club way back in 1926.  The club name was changed in 1938, but not the espirit de corps.  Here’s club prexy W4DSW (right) presenting a beautiful trophy, on behalf of the RARC, to member W4QCW  – [Bob Eshleman, now W4DR] first qualifier for the ARRL 5BDXCC Award.”

There was a reorganization and election of new officers in 1929.   [The Richmond Ham, which quotes the following article in its issue of November, 1979, page 1, saying it appeared in the Richmond News Leader in 1929.  It goes on to say the 50th anniversary since 1929 was celebrated with a banquet on Friday, November 9, 1979, at Emmanuel Episcopal Church.]

“Reorganization of the Richmond Short Wave Club, composed of a group of code radio enthusiasts, was perfected last night at a meeting in the Central Y.M.C.A.  J. L. Grether was elected chairman; O. M. Selph, sub-chairman, and T. T. Mathewson, secretary and treasurer.

“About forty operators were present and thirty-six signed as members of  the organized club.  It was decided to hold weekly meetings, gathering each Tuesday evening at 8 o’clock.  For the present the sessions will be held at the Central Y. M. C. A.

“A suggestion that permanent quarters may be obtained where a transmitting and receiving station can be established is being investigated and a report is expected to be made at the next meeting.  With this move in prospect, Gordon Hammond, of Ashland, offered the club the use of his two transmitters, which are of 7.5 watts and 75 watts of power.

“G. L. Whitehorn was awarded the 50-watt tube donated by WRVA, and M. J. Duke, of Rocky Mount, N. C., received the screen grid receiving tubes for having come from the greatest distance to attend the meeting.”

There was a burst of energy and action in the following years:

2.  There was a long article in QST, December, 1930, describing the meeting in Richmond of the Virginia ARRL Convention.

3.  The newsletter “Virginia Radio Bulletin” was published each month by the Richmond Short Wave Club, beginning January 1, 1931, with Bob Eubank, W3AAJ [later W4WT], as Editor.  In 1934 it was named “The Virginia Ham.”  The Club’s archive contains copies of issues from 1931 to 1934.

There are six items in the following newspaper report that support April, 1916, as the date the Club was founded.

Download “HISTORY OF THE RICHMOND ARC” as a PDF